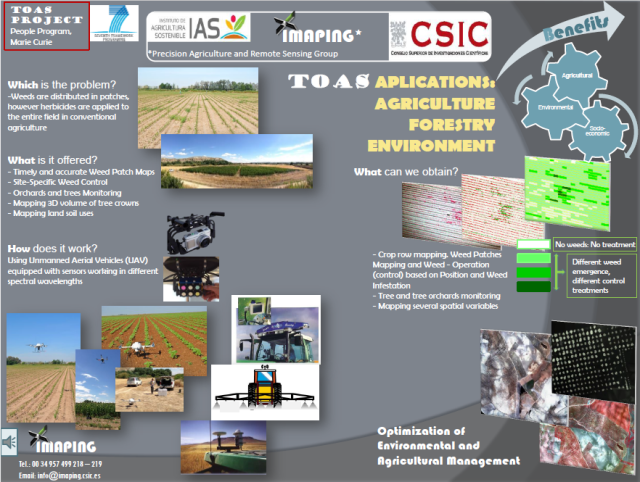 Descriptive Pannel of the TOAS Project

This project was focused on generating georeferenced weed infestation maps of certain annual crops and permanent woody crops by using aerial images collected by the new remote sensing platforms known as unmanned aerial vehicles (UAV). The specific objectives are concentrated on the configuration and use of the UAV and sensors for image acquisition, the evaluation of the specifications (sensor type, imagery characteristics, crop-weed phenological stage) required for each type of crop, and the development of automatic and robust image analysis procedures for crop assessment and weed mapping using the captured remote images in order to optimize the herbicide applications or other weed control operations. 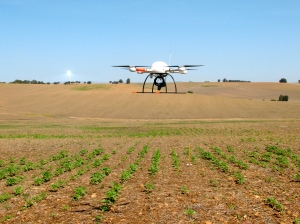 The project progressed accordingly to the planned objectives. Two annual crops (maize and sunflower) and two woody crops (poplar and olive) were selected to develop the system. A quadcopter platform with vertical take-off and landing (VTOL), model microdrones md4-1000, was used to collect the set of aerial images over the experimental crop-field. Two different sensors, a still point-and-shoot camera and a multispectral camera, and three flight altitudes (30, 60 and 100 m) were tested with the objective of evaluating the optimal spectral and spatial resolutions needed for weed discrimination in early-season. The main phases of the UAV workflow were defined: 1) mission planning, 2) UAV flight and image acquisition, and 3) image orthorectification and mosaicking. The image spatial resolution, area covered by each image and flight timing were very sensitive to flight altitude. At a lower altitude, the number of images needed to cover the whole field may be a limiting factor due to the energy required for a greater flight length and computational requirements for the further mosaicking process. Spectral differences between weeds, crop and bare soil were significant in the vegetation indices studied, mainly at a 30 m altitude. These results suggest that an agreement among spectral and spatial resolutions is needed to optimise the flight mission according to every agronomical objective as affected by the size of the smaller object to be discriminated (weed plants or weed patches). An extended description of the configuration and specifications of the UAV and the sensors tested in this project over an experimental sunflower crop were published in Torres-Sánchez et al., 2013 (PLOS ONE, 8(3): e58210). 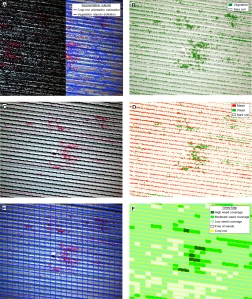 The successful of this investigation was associated to the development of advanced algorithms for the management and analysis of the UAV images. This project proposes the implementation of the object-based image analysis (OBIA) methodology in order to solve the limitations of the spectral similarity between pixels of weed and crop. The OBIA algorithm that is being developed in this project identifies spatially and spectrally homogenous units (objects) created by a procedure known as segmentation and then it uses multiple features of localisation, proximity and hierarchical relationships that, with the spectra of each object, drastically can increase the success of image classification. At this point, progress in the analysis of the remote images has been mainly done in maize fields. In this crop, the crop rows were dicriminated with 100% accuracy and the weed maps, with weed infestation levels classified in three categories (low, moderate and high), were produced with 86% of overall accuracy. A whole description of the methodology and results were recently published in Peña et al., 2013 (PLOS ONE, 8(10): e77151).

The expected final results of this project will be to generate efficient decision support system data that can be used with specific spraying machinery for applying herbicide only to weed infested areas in the crop-field. By using the UAV technology proposed in this project, the weed maps could be generated just in the time recommended for herbicide applications to the crop-field, which usually corresponds to the early-season of the crop phenological stage. These site-specific weed management (SSWM) techniques allow a drastic reduction of the volume of herbicides applied to the crop-field when compared to conventional weeding operations. The ultimate objective of this project is in line with the European policy for the Sustainable Use of Pesticides, which promotes reductions in herbicide applications and the utilisation of adequate doses according to the weed density.